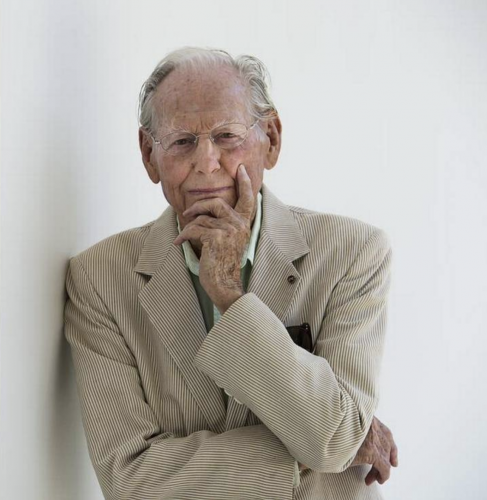 Born in Mesa, Arizona in 1920, Wayne Thiebaud started his career as a commercial artist. From 1938 to 1949, he worked as a sign painter, an illustrator, a cartoonist, a publicity manager and as an artist for Hollywood film studios. Thiebaud joined the Air Force in 1942, and spent two years there painting murals for the army. It is not difficult to detect the influence that this commercial experience had on his later paintings attributed to Pop Art; Thiebaud's characteristic work displays consumer objects such as pies and cakes as they are seen in drug store windows. Executed during the fifties and sixties, these works slightly predate the works of the classic pop artists, suggesting that Thiebaud may have had a great influence on the movement.
From 1949 to 1950, Thiebaud studied at the San Jose State University and from 1950 to 1953 at the California State University in Sacramento. He had his first solo exhibition at the Crocker Art Gallery in Sacramento, and between the years of 1954 and 1957, he produced eleven educational films for which he was awarded the Scholastic Art Prize in 1961. Thiebaud lectured at the Art Department of the Sacramento City College until 1959, when he became a professor at the University of California in Davis.

Wayne Thiebaud has been associated with Pop Art, but has also been seen, due to his true to life representations, as a predecessor of photorealism. Thiebaud uses heavy pigment and exaggerated colors to depict his subjects, and the well-defined shadows characteristic of advertisements are almost always included. Objects are simplified into basic units but appear varied using seemingly minimal means; one influence on Thiebaud's still life paintings may be Giorgio Morandi, whose contemplative, palpable and delicate works share many characteristics with those of Thiebaud. Today, Wayne Thiebaud lives and works in California.